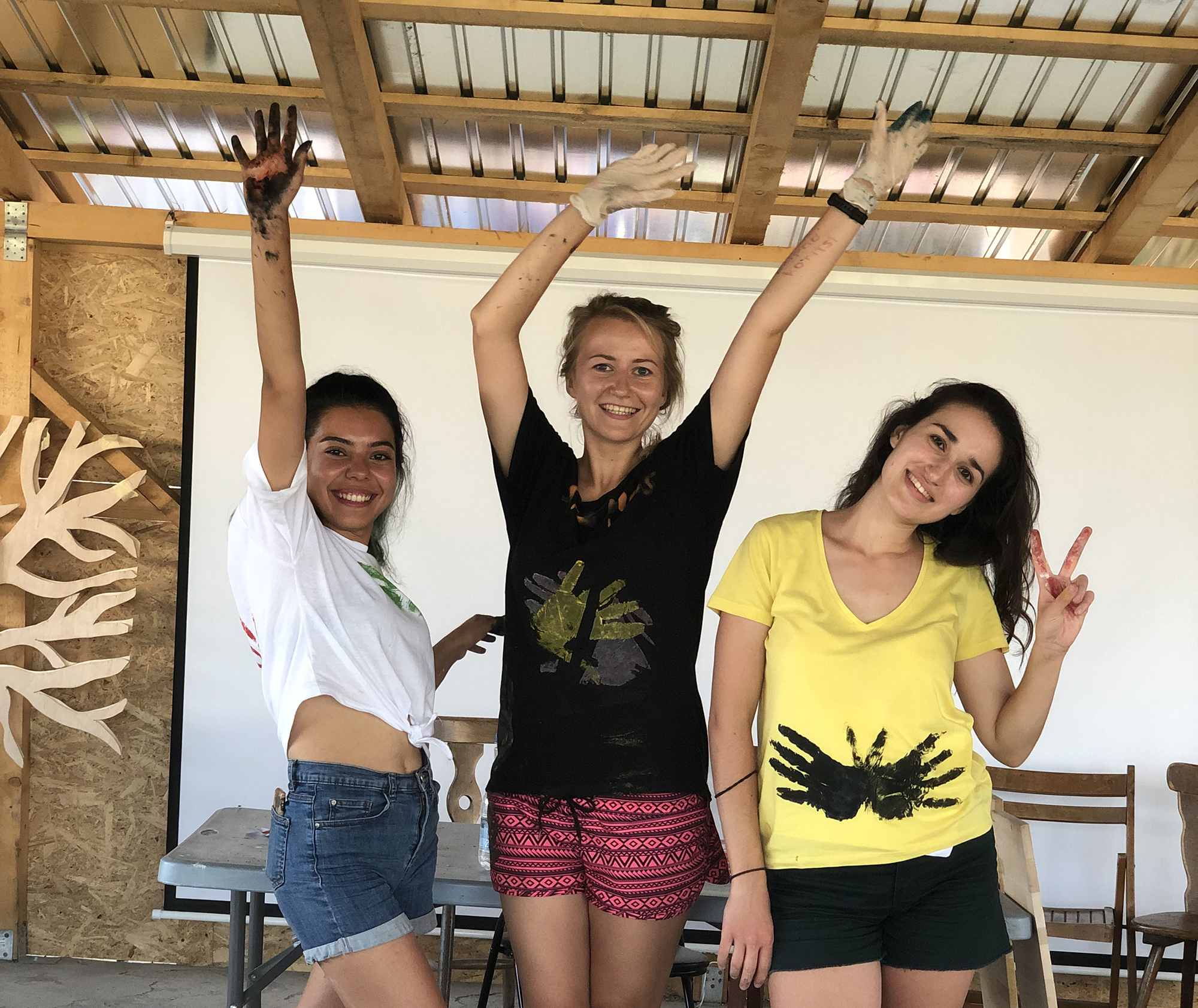 Usually I write my blog in Lithuanian language but this time I let myself to ignore my forgotten grammar and to write an article in English. This language will help to share my impressions with other participants from foreign countries: Greece, Turkey, Spain and Romania (more than 40 participants). And also it is my way to promote Erasmus+ activities.

At first I would like to mention that I was worried about this project (Recycle for a better world 2019 08 01 – 2019 08 12) because of several reasons. I’m 29 years old, so I expected to be one of the oldest participants (I was asking myself if it is easy to adapt and to forget about age and life experience differences). What’s more, I had only one youth exchange project in my life and it was many years ago – in 2006 (Bergen-Belsen International Youth Camp, Germany, holocaust topic). Also I worried about project’s intensity because I didn’t have holiday for a long time and felt really tired of routine, of social life, of everything. Anyway I wanted to participate in this project [which I found here] because 1) I enjoyed the topic 2) it supposed to be my first time in Romania 3) I wanted to escape for some time. I felt very confused and didn’t know what I want in my life anymore. This project seemed to be a chance to refresh myself and to find new directions.

The connected/double flight to Romania took about 20 hours + trip to Vilnius Airport from my town Kaunas + trip from Timisoara Airport to Milcoveni. I won’t tell you everything in details but the true is that we (all Lithuanian participants) reached Milcoveni and our camp ‘Marabu’ very tired and hungry. Milcoveni is unusual village: wooden electricity poles, geese walking in the streets, shops without signboards (and with very poor food assortment). You might feel like in the middle of nowhere. But the very next day, after eating and night rest the impressions started to change. I realized that Milcoveni is perfect place to disappear, forget the routine, job, relationships, all my past and the future.

The coordinator of this project was Claudiu. He’s amazing! Claudiu is always in a good mood, flexible and very successful in mixing support and strictness (sometimes we were lazy and tried to cross some lines/defy a schedule…).

The program started with name games, energizers and team building. Later we got various tasks about recycling topic. We were discussing, playing, having some workshops, creating some stuff using upcycling ideas.

In this camp we found out that Romania has serious issues about recycling. For example Milcoveni doesn’t have any recycling system. You can put rubbish into different bins but those rubbish won’t be recycled, it will be taken by one single transport with only one rubbish section. To be honest, sometimes I felt desperately about recycling situation and this project, it was more like a childish game in a sandbox than serious solutions. For sure, it is a global issue and it should be solved by governments, not Erasmus. In those pessimistic moments I tried to calm myself down and to focus on other things.

It wasn’t very difficult because we had lots of other activities! For example we had two trips in order to explore Romania and its culture. We visited Resita, Oravita and Anina towns. They are not modern, the architecture is quite odd but it was interesting to find more. I really enjoyed the mountains (we don’t have them in Lithuania) and green areas. Also I enjoyed low prices in Romania, you might feel rich here :)

In this project we tried one long-term game, named ‘Secret friend’. At first everybody writes his/her name on the piece of paper, folds it and mix with others pieces. Then everybody picks one piece of paper with a name of other person and has to show a special attention or/and give some gifts to that person. Everything should be done in secret ways.

I was very happy when I found Stelios name on  the paper. He’s a smart person and it was easy to have fun. I have created new e-mail address and secretly invited Stelios to more secret e-mail letters game. He was my ‘victim’ and I was ‘a murderer’. He was trying to figure out who I am while I was trying to avoid recognition. It was intense, risky and intriguing game for both.

And I was a secret friend of Ömer. He was quite passive with gifts but active by showing attention. I didn’t expect him to be my secret friend because he asked Romanian girl to pass the gift for me. That’s why I was sure that my secret friend was one of Romanian guys (they weren’t very active in communication because they don’t speak English).

We spent time not only with other participants but also with some local people and animals. Stelios found his ‘son’ Yannis [who’s a child of people working in Marabu camp service].

Me together with Lithuanian group fell in love with little kitty, we named it Gricka [fictive word which meaning is (not) ‘love’].

Now I can tell more about night vibes!

We had intercultural nights in this project. Participants of all countries prepared some information, games and food to introduce their country. I enjoyed that time and new tastes, expecially Greek apetizer dzadziki and turkish candies with walnuts.

Moreover, every night about 22:00 we were entering the portal to another world :) Fireplace, beer games, shot games, sober and drunk communication, playing guitar, listening music,  dancing, laughing, sympathies and little secrets. All nights were similar and different at the same time. Everybody had a possibility to find enjoyable activities and groups of people. Sometimes we had very difficult mornings due to lack of sleep. But we didn’t change anything. We wanted to use time in Milcoveni, to take as much as we can…

We got lots of inside jokes and I’m a little bit sad because those jokes probably won’t survive with people who weren’t in that camp. We had Stumykla – a community for/of gossiping and teasing each other. We were creating incredibly stupid and funny stories about male pregnancy or fake romances between participants. Sometimes we were laughing so hard that also cried at the same time. Some Stumykla’s sessions took several hours and still didn’t get boring :)

We were playing in many ways and I’m absolutely sure that all people should play, no matter what age they are! Games keep us alive, happy, creative, playful and youthful.

Some people in this project were very enthusiastic about learning new words. I think Ömer was a king of new words. OK, maybe it is a little bit inappropriate because of our Lithuanian group taught him not only good words, but bad ones too :)

In any case, other groups or some of their members weren’t shy too. Thanks to Stelios for Greek lessons. Now I know some good Greek words such as kali mera (good morning), kalo vradi (good night), exypno koritsi (smart girl) and also malaka, poutso, tsiutsiu (sorry, I don’t know the correct spelling) :) While working in groups Baris and me taught each other word ‘annoying’ in our languages (erzinantis – Lithuanian version, bunaltidže – Turkish version). And, of course, thanks to Claudiu, for phrase ce pula mea which is as important as oxygen for Romanian people :)

The last night in Milcoveni village was the most pleasant. I didn’t think about the past or the future, I was laughing till tears or was looking to the fire very calmly. I didn’t feel regret about the end and saying goodbye to people who gave me joy and inspiration. I was in that moment and felt happy.

And so I’m already back in Lithuania. I still feel happy, inspired and I’m looking for new adventures :) I’m sorry for all missed opportunities to communicate with some participants.

Some of you found a special place in my heart and soul. I hope to see you again by lucky accident or with a drop of effort. Kisses and best wishes, my grickas :*

P. S. If you want to copy/use the whole text and pictures on other websites, have questions, impressions or more, please comment below the text or contact me :)